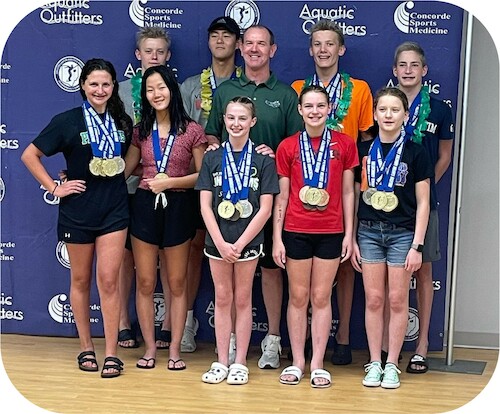 The David YMCA Phantoms will focus on individual development. Swimmers' development is not measured by the overall finishing pace, but by improvement of times, attitude, behavior, goal achievement, sportsmanship and creatgng life-long leaders within the community. In joining the David YMCA Phantoms you are embarking on a journey of self-improvement, enjoyment, success and development through powerful skills and abilities needed for accomplishing any goal in life.

Coach Doug has been with the Phantoms since 2015. His past coaching started with one year as Student Assistant as West Virginia University. He also served two years coaching at Perry Aquatic Club, one year head coach at North Olmsted High School.

His swimming career started with four years at Massillon High School, graduating in 1989. He was a four-year team captain, four-year district qualifier, and two-year OHSAA state qualifier. He then went on to attend West Virginia University where he was a four-year letter winner and team captain during his senior season. He Graduated from West Virginia in 1994. In total, he competed for 18 years as a swimmer. In 2009, Doug was inducted into the GCAA Hall of Fame.

Doug currently resides in Jackson Township with his wife Cheryl. They have three children: Victoria, Holden and Lauren. He enjoys spending time with his family. ​

Michael is a 2016 graduate of Jackson High School and swam on the team all four years. During his high school swimming career, Michael was named captain his senior year, earned All-Ohio distinction three times, All-County four times and was an Academic All-American.

He went to Northern Michigan University and swam for the Wildcats for four years. Michael helped his team maintain a 3.6 GPA, be consistently ranked in the Top 10 nationally for Division ll and win the Calvin College Mid-Season Invite in 2018. He recently completed his studies at NMU majoring in Elementary Education with a focus on Math and Science.