How it all began

YMCA Camp Tippecanoe has offered youth safe and exciting adventures for many years.  It all began in 1906 when the Canton YMCA conducted the first boys' camp in Canton, with about 30 boys attending.  During these early years of camping, the location changed several times.  By 1911, however, a piece of property came into existence on Mud Lake, later called Turkeyfoot, and some permanent fixtures were made possible in 1916, with a one acre site called Camp Inawendewin.  In 1927 W.H. "Boss" Hoover contributed $5,000, and at that time permanent waterfront fixtures were added.

Further expansion of the camp took place in 1934, when adjacent property became available. A gift from H. W. Hoover, president of the Canton YMCA, enabled the camp to purchase the property. Under the chairmanship of George Deuble the camp improved the site by adding bunks for cabins. In 1930, H.W. Hoover presented the camp with a check to build a dining hall. Through the years camp programs grew and developed, and more boys attended gradually exceeding the capacity of the camp.

By the early 1950s the Portage Lakes were becoming a popular destination for many people and it was determined that the waterfront was becoming unsafe for camp waterfront activities.  A committee of the Camp Board of Managers was appointed in 1956-57 to select the site suitable for a new camp not too far from Canton.  The committee explored several sites on Lake Clendening; all who viewed this rugged natural area where impressed with the development possibilities of the site.  The sale of the Turkeyfoot Lake property provided enough funds to purchase 515 acres on the shores of Lake Clendening and to put in one mile of new road to the present lodge site.   The new camp was named YMCA Camp Tippecanoe.

In 1957, a joint Canton Community fundraising project was begun by the Knights of Columbus. Funds were raised for building and construction of the original camp including: the lodge, 14 cabins, the health center, craft building and the director’s house.  And in 1958, the first 100 boys entered through the gates for the first summer at YMCA Camp Tippecanoe.

C BAR T AND OTHER FACILITIES

Throughout the 1960s, under the leadership of Camp Director Dan Farch, other buildings were added as programs grew. These included the Lazy T bunkhouse, the caretaker's home, and Adirondack shelters on The Ridge. Special funds from the Deuble Foundation through the years have made many new buildings possible; including a second large barn at the C Bar T ranch in 1973 and a new C Bar T Lodge in 1982.

Between 2010 and 2015, almost $1,000,000 of improvements were made to camp facilities and infrastructure including; major renovations to the lodge, a new maintenance facility, a new sewage treatment plant, and the installation of a zipline program center.

With nearly 1100 acres and access to adjacent Muskingum lands and Lake Clendening, YMCA Camp Tippecanoe is uniquely positioned to address the “Nature Deficit” that is facing the youth of Stark County.  YMCA Camp Tippecanoe is the perfect destination for fun and adventure: a waterfront, rolling hills, and plenty of space for excting activities.

Connect with us and other alumni at Email or on our ALUMNI FACEBOOK GROUP if you are a former camper or staff at YMCA Camp Tippecanoe. 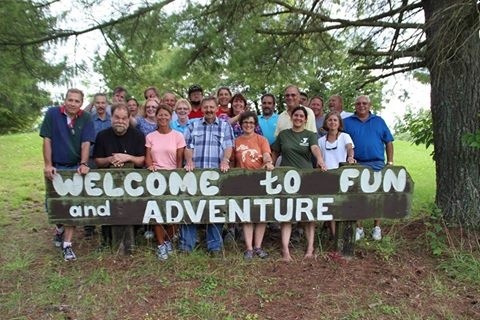